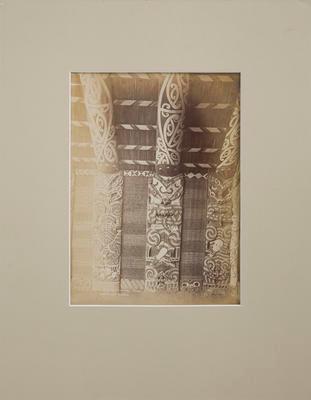 Photograph of the outside of Taipari's meeting house

Maker
Burton Bros.
Description
Typical of many images of Maori during the late 19th & early 20th Century’s this photograph was one of many that were produced for the insatiable European interest in the peoples of the antipodes.

Alfred Henry Burton (c1833-1914) was born along with his brother Walter in Leicester, England. Alfred came out to New Zealand at least once prior to him and his brother emigrating in the 1860’s. The brother quickly established the photography firm Burton Brothers that specialised in portraits and images of the New Zealand landscape and Maori for the flourishing tourist market. In 1877 Walter left the firm and later committed suicide. Alfred continued to run the business and made some of his most important photographs during the 1880’s particularly those taken in the Waikato. He retired in 1898 and died in Dunedin in 1914.
See full details

Photograph of the outside of Taipari's meeting house