Biography
Born in Karkskrona, Sweden, Edward Fristrom was the son of a Lutheran Minister and the brother of Oscar Fristrom (1856-1918) who was a noted Australian portraitist and the founder of the Queensland Art Society. Edward came to the South Pacific on a Swedish training ship but deserted while the boat was in Australian waters. After joining his brother in Bisbane he moved on to Sydney and Tasmania and then arrived in Auckland in 1903. He taught at the Elam School of Art from 1911 until 1915, visited Wellington and then emigrated to the United States. He died in Carmel, California. His landscape paintings were usually small in scale, and loose and and expressionistic.

The artist known in New Zealand as Edward Friström (sometimes Fristrom) was born Clas Edvard Friström on 23 January 1864 in the parish of Torhamn, near Karlskrona in southern Sweden. His parents were Clas August Friström, a teacher, and his wife, Christina Carlson. He is known to have had an elder brother, Carl Magnus Oscar, born in 1856. Edvard may have spent time at a German art school and painting in France and Spain, but neither he nor Oscar is recorded as having attended the Royal Academy of Fine Arts in Stockholm; both were probably self-taught. When Edward Friström married Margaret Johnston in Brisbane, Australia, on 11 July 1886, he described himself as a photographic artist. He was naturalised in 1888. Oscar had been living in Brisbane since 1884, and was, by 1885, in partnership in a photographic studio and exhibiting painted and photographed landscapes and portraits. From 1888 Edward's work was also displayed at the studio's small gallery. Margaret and Edward Friström had three children, and in 1897 Edward was sufficiently established to have his own studio in Brisbane. He was a member of the Council of the Queensland Art Society, which Oscar had helped establish, in 1892, from 1894 to 1896, and again from 1898 to 1903. He exhibited 53 paintings with the society between 1899 and 1902, and resigned in 1903, by which time he was already painting in New Zealand. Friström joined the Auckland Society of Arts, and in the society's 1904 exhibition he presented seven paintings: three Brisbane scenes, three New Zealand scenes and a Maori portrait. He had become established in a studio in Queen Street, offering the same services in photo-portraits as he had in Brisbane. His association with the photographer Gerald Jones dates from this time. Friström moved to Wellington about 1910. His landscape paintings demonstrate extensive travel throughout New Zealand. He had already visited the United States before 1903, and travelled a number of times between Australia and New Zealand and across the Pacific while living and working in New Zealand. Returning to Auckland, Friström taught at the Elam School of Art, under the directorship of E. W. Payton, from 1911 to 1915. His salary was £150 per annum with a teaching load of 27½ hours per week including four nights. He was contracted to teach drawing and painting, both elementary and advanced. A warm and charming man who took pleasure in his work, Friström made a marked impact on his students both as artist and teacher. He taught with energy and enthusiasm and had a 'happy knack of arousing and keeping a very keen interest'. In March 1912 Friström applied to the Elam board of managers for the provision of superannuation, and shortly after requested a pay rise of £50 per annum. After protracted negotiations, in which the director, Payton, was given full authority to act, Friström's request was declined and he tendered his resignation. Since his successor was hired at the salary that Friström had requested, it seems that Payton's refusal may have had personal grounds. In response to his resignation a group of students left Elam and formed a breakaway class which Friström attended as mentor. The students, who included Minnie White, Ida Eise, George Finey and Marcus King, made representations to the Elam board in May 1915, stating that Friström was leaving the school against the wishes of the students. However, the board informed them that his resignation had been accepted and they were not prepared to re-open the subject. The students continued to lobby in the local press, but Friström left Elam on 30 June 1915. On 5 July Friström and his wife left Auckland for Wellington where they took ship for the United States to join a son and daughter. Despite his involvement in art activities in northern California Friström did not become widely known in the United States. He exhibited rural and seaside views, but found America's great distances inconvenient and returned to studio work despite his preference for plein air painting. He died on 27 March 1950 in San Anselmo, California. Friström's work, like that of James Nairn and Girolamo Nerli, received a mixed reception in New Zealand. Relatively conservative, but including elements of impressionism and fashionable avant-garde techniques, it affirms the local through a belief in everyday experience and, in a formalist way, constructs a sense of place. Friström's paintings, decidedly anti-picturesque, resist the sublime moment and establish a landscape which fills void and hollow with a focused mundanity. The New Zealand he defines as a consequence is both locally specific yet recognisably part of a diverse international modernism. 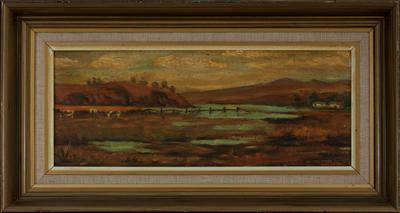 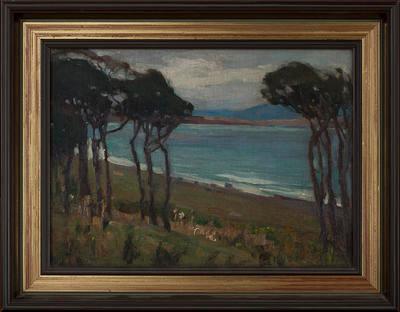 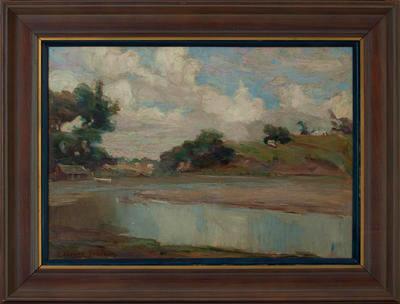 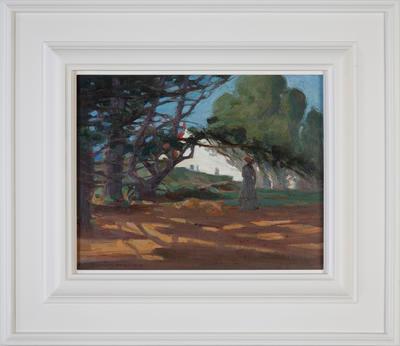