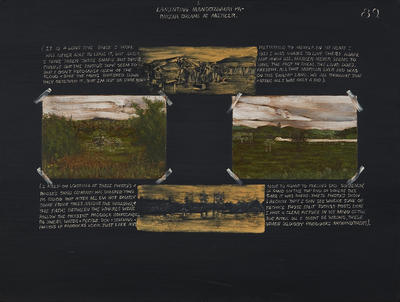 Maker
Michael Shepherd
Production date
1989
1990
Description
This six panelled oil painting is a sequence that describes Michael Shepherds’s interest in the history of the small settlement of Mercer. Captain Henry Mercer, after whom the township is named, was killed in 1863 in the trenches at Rangiriri Pa. As a memorial, Mercer’s name was given to the nearest place of significance, which happened to be the pa or village of Mangatawhiri, a town he may never have seen. The paintings include text and imagery that references local, national and international events and people, relating the way connections can be made across the span of history.

Michael Shepherd (1950 - ) was born in Hamilton and grew up in Ngaruawahia. His family moved to Auckland in 1960 where he attended school intermittently due to poor health. In the 1970’s he went to Elam School of Fine Art and was later awarded a QE II arts council travel grant to work at the central research laboratory at the Rijksmuseum in Amsterdam. Shepherd is completely engaged with history and following his time in Europe, began to concentrate on particular aspects of the New Zealand narrative, including small centennial publications, information about heroic pioneers or particular colonial genealogies. He was also influenced by a number of important books including Judith Binney’s ‘Mihaia’ that told the story of the Maori prophet Rua Kenana. Shepherd, who describes himself as a ‘history painter’ was intrigued with the confusion between Maori and Pakeha versions of history and has set about depicting this slippage through his paintings.
See full details