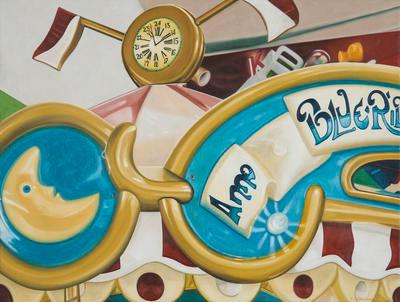 Maker
David John Woodings
Production date
2009
Description
Influenced by the destruction of the Christchurch earthquakes, Woodings uses hyperrealism to create a sardonic friction between toys and the ruins which they now portray. Acting as metaphor for the disjunction between reality and fantasy, this painting is suggestive of a merry-go-round.

David Woodings (1956–) studied at Elam School of Fine Art in the early 1970s under Don Binney, Robert Ellis and Garth Tapper. Heavily influenced by photorealism, Woodings works are also politically and socially charged. Woodings moved to Southland in 1999 to take up the position of Director of the Regional Museum and Art Gallery, but he returned to full-time painting in 2005. Since 2010, David’s work has been heavily influenced by the Christchurch earthquakes.
See full details