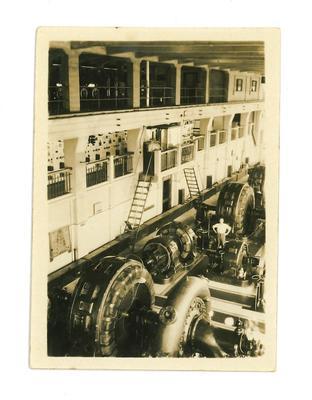 Maker
William Henry Potter
Production date
Circa 1920s
Description
Black and white photograph of power station machinery (possibly Horahora or Arapuni).
Part of collection that belonged to William Henry Potter (22/8/1903-14/1/1993). William Potter worked in the hydroelectric industry at various time during his working life. Firstly for the Public Works Department from 1923-1935. During this time he worked at Horahora and Arapuni Power Stations. During 1941-1943 he was employed by the State Hydro Electrical Department in Hamilton as Office Engineer and was responsible for maintenance and operation of electrical supply (which included 22 substations). From 1944-1947 he was Senior Office Engineer at the State Hydro Department in Auckland.
See full details