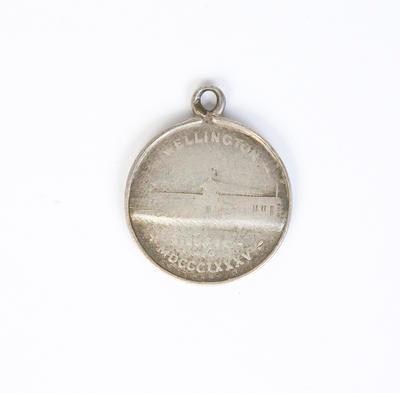 The exhibition had been initiated and organised by leading politician Julius Vogel. He believed it was just what the country needed to revive its ailing economy. By gathering under one roof everything that New Zealand industry had to offer the world, he hoped to lift the confidence of New Zealanders, as well as attract more foreign investment.

In his speech at the exhibition opening, Vogel noted that New Zealand had a good climate, a fertile soil, and an abundance of water and coal. Moreover, its isolated position gave substantial protection to its industries. Owing to these factors, many people believed it was destined to become a large producing and manufacturing country.

The Governor previewed the exhibits in the Home Industry Branch, and described them to the audience at the opening: ‘First and foremost I came on an organ . . . made in the leisure hours of Mr Fraser Jones and his family .… Well I went on and I came to another work – that of a young lad .… It is a beautiful model of a steam engine .… Then I found specimens of tools made by a boy of Wellington College, and a model bridge by a boy of Wellington College, twelve years old .… I must also mention a telescope made by Mr Parsons. To enumerate all the works that I saw would occupy all the afternoon. Suffice it to say, I found very valuable ladies’ work, and among it an enormous quantity of baby clothes. This shows how much we want additional population here. Then there is school work by children, and some admirable fretwork and carving.’ (1)

The whole exhibition cost taxpayers 9,000 pounds - a lot of money at the time. But they made full use of it, and came from all round the country to exhibit and see exhibits.
See full details