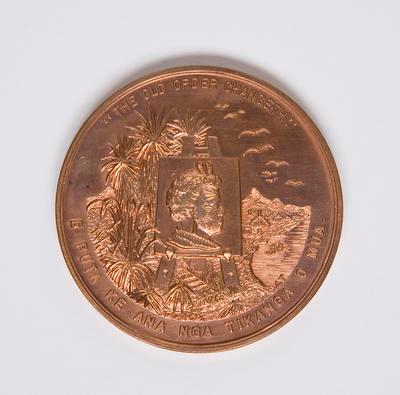 Production date
1967
Description
"Issued by the Numismatic Society of Auckland Inc. To Commemorate the Introduction of Decimal Coinage to New Zealand July 1967.
The Obverse design is from a die by Anton Teutenberg believed to have been engraved in the late 19th Century. In it the engraver has captured the Maori as he was, before European influence changed his character and outlook.
The Expression in Maori and English "The Old Order Changeth", is most appropriate for the change to decimals which will effect both Maori and European (Pakeha) alike. The reverse was designed by the Society and Simply states the reason for the issue. Working Dies prepared and medals struck by Dick & Watt Ltd, Wellington N.Z."
– Notes taken from small card received with copper and silver struck medals. Total Number struck – 300 in copper.
See full details