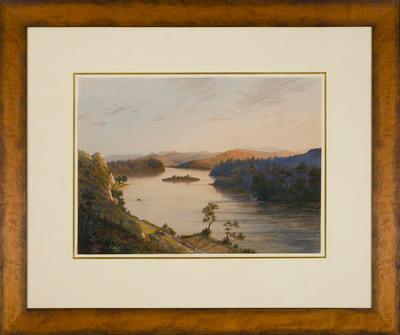 View up the Waikato River from the Telegraph Hill, Mercer

Maker
Alfred Sharpe
Production date
1873
Description
Alfred Sharpe’s landscapes were often constructed around the atmospheric effects of light such as the warm tones of twilight or the soft, fresh glow following a rain shower. This particular scene south of Auckland was a favourite for a number of artists of the time. It was considered a highly romantic outlook, a picturesque setting that belied a violent and heroic past as one of the sites of the recent Land Wars. The first recorded outing of this work was in 1876 when it was shown in the New South Wales Academy of Art’s Fifth Annual Exhibition of Works of Colonial Art. It then appeared a year later in the Auckland Society of Artists exhibition. A critic later wrote, “We would wish the artist would be less painfully elaborate and if he would use his brush more freely and with greater dash, he would save himself great labour, and more generally please his many admirers. We hope he will in future eschew such photographic details as are seen in the foreground of his Mercer in the Waikato”.

Alfred Sharpe (c1836–1908) was born in Tranmere, Cheshire to William and Mary Sharpe. His father, a merchant, ship owner and an admirer of the arts, exposed Sharpe to the works of many artists including the Pre-Raphaelites, some of whom he met and spent time with. He is thought to have attended the Birkenhead School of Art before travelling to New Zealand in 1859. After spending time in a variety of occupations in the far north, Sharpe established himself in a studio in Grafton, Auckland. He quickly became known within the burgeoning art scene for his distinctive painting style and commitment to increasing awareness of the arts. After making a small but significant contribution to the New Zealand art community Sharpe decided in 1887 to move to Newcastle, Australia where he remained until his death at the age of 73.
See full details

View up the Waikato River from the Telegraph Hill, Mercer