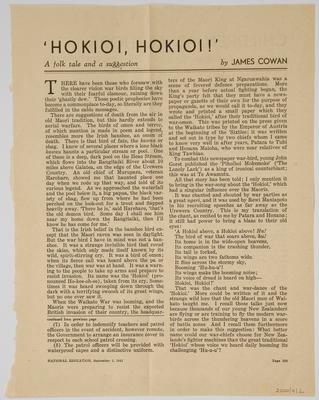 Maker
James Cowan
Production date
01 Sep 1941
Description
Article – 'HOKIOI, HOKIOI!' A folktale and a suggestion by James Cowan. This page was ripped from the journal National Education, Sept 1, 1941, pg. 289. It was later found folded and interleaved in a copy of ‘Te Hokioi e Rere Atu Na’. Cowan’s article talks about the legendary Hokioi, (also known as Haast's eagle) a bird of omen to Maaori whose call if heard over a paa or village, signalled that war was imminent. A year before the Land Wars began, the King Movement decided it needed a publication for their own supporting their cause, and produced ‘Te Hokioi e Rere Atu Na’, named after the bird.

James Cowan (1870–1943) grew up in East Tamaki on land confiscated from Maaori during the Land Wars, a period that was to inform his lifelong fascination with Maaori and colonial history. A fluent speaker of te reo, Cowan pursued a career as a journalist, publishing in numerous newspapers, magazines and journals over the years. However, it was his continuing interest in Maaori history that led to his most notable work, the two-volume ‘The New Zealand wars: a history of the Maori campaigns and the pioneering period’. Over his career as a writer, Cowan published over 30 books on various topics but the subject that was most consistently covered was his love of all things Maaori.
See full details