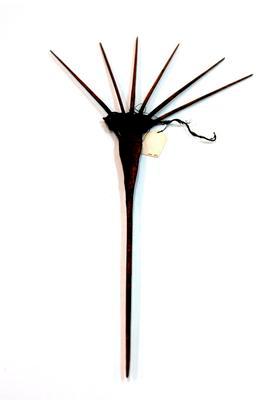 Maker
Unknown Maker
Description
In 1974 Waikato Museum acquired a selection of items, including this ornament, from Graham Jackson. Jackson was a New Zealand anthropologist who spent time living with and researching the Kopon and the Kalam people of the Lower Kaironk Valley in Papua New Guinea.

Jackson fieldnotes: Made by males. Worn by boys emerging from their seclusion (from women but not men) of about three days, at initiation. The prongs have plumes of a bird called rabal put on them. Although I have identified about 120 birds, this one still eludes me.