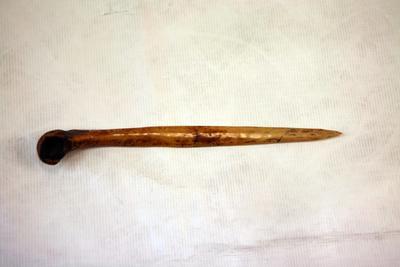 Description
In 1974 Waikato Museum acquired a selection of items, including this bone knife, from Graham Jackson. Jackson was a New Zealand anthropologist who spent time living with and researching the Kopon and the Kalam people of the Lower Kaironk Valley in Papua New Guinea.

Jackson fieldnotes: Used to split off the pith of fruit pandanus from the outer part which consists mainly of seeds. They are also used to make holes in the bark which is used as a container in which to cook food. The bark is folded to make a cylinder and slivers of wood are put through the holes to hold the cylinder together.
See full details