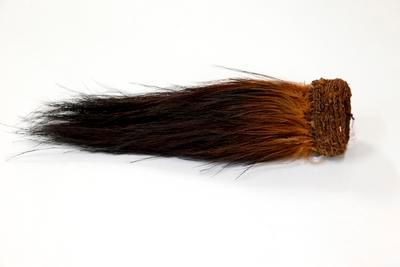 Maker
Ywnop
Description
In 1974 Waikato Museum acquired a selection of items, including this head ornament, from Graham Jackson. Jackson was a New Zealand anthropologist who spent time living with and researching the Kopon and the Kalam people of the Lower Kaironk Valley in Papua New Guinea.

Jackson fieldnotes: Head ornament of cassowary feathers bound with two ply cord. Urayon: this term simply means cassowary. These are cassowary feather headdresses, worn by men for ceremonial dances. The headdresses are worn inverted on the head by small boys, about 2-3 years old (18 months – 3 years), during a special ceremony ("dressing up" ceremony which is the first initiation) held each year which precedes immediately the major annual ceremony, lasting 2-3 days, involving the seclusion of the boys in a hut from which women are banned. They listen to chanting which is intended to be a form of benediction for their growing up. During the last few hours of the ceremony they wear the headdresses, at the conclusion of which they parade around the hut.
See full details