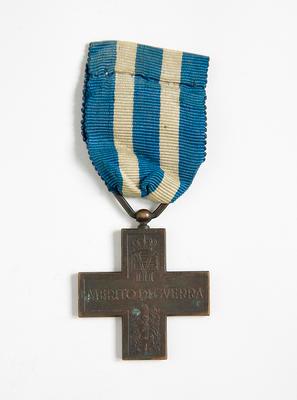 Production date
1918
Description
Croce al Merito di Guerra (War Merit Cross) awarded to members of the armed forces for war merit in operations on land, sea or in the air, after minimum one year of service in the trenches or elsewhere, in contact with an enemy.
This bronze cross was instituted by King Victor Emanuel III on 19 January 1918 and was also awarded to those who, wounded in combat, were given the medal of the wounded or to those who, mentioned for war merit, received a promotion.
When having performed an act of valour which was deemed insufficient for the Medal of Military Valour, the War Merit Cross could be awarded instead. From 1922 onwards a bronze sword on the ribbon designated such an award.
From its institution until 30 May 1927 1,034,924 Crosses were issued. A second award was indicated by a bronze star on the ribbon.
The reverse bears a 5-pointed star on a background of rays. The obverse has the royal cypher in the upper arm (VE III under a crown), "MERITO DI GVERRA" (War Merit) on the horizontal arms and a roman sword point upwards, on oak leaves, in the lower arm.
See full details