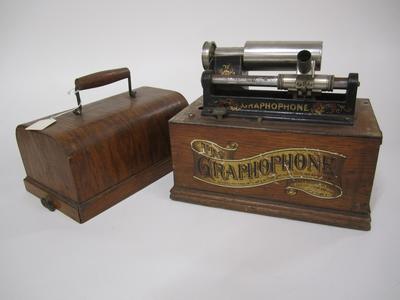 Maker
The American Graphophone Company
Production date
Circa 1900
Description
"Emile Berliner (1851-1929 ) patented the gramophone.
Early attempts to design a consumer sound or music playing gadget began in 1877 when Thomas Edison invented his tin-foil phonograph. The word "phonograph" was Edison's trade name for his device, which played recorded sounds from round cylinders. The sound quality on the phonograph was bad and each recording lasted for one only play. Edison's phonograph was followed by Alexander Graham Bell's graphophone. The graphophone used wax cylinders which could be played many times, however, each cylinder had to be recorded separately making the mass reproduction of the same music or sounds impossible with the graphophone".