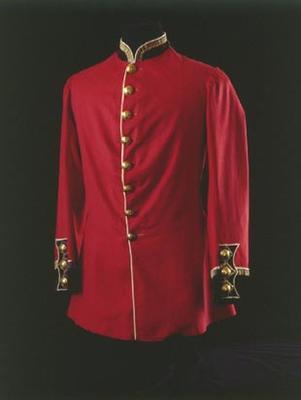 Maker
Unknown Maker
Production date
1860s
Description
Originally the uniform of Captain James MacPherson who settled in Hamilton. The Service Unit for this uniform was the 70th Regiment for the Waikato Campaigns. This jacket tunic would have been worn at formal social functions.

The tunic is a rich red colour, decorated with velvet facing and brass metal buttons and gold piping. The style is fitted to the body, cut to the waist with a skirt length to cover the buttocks. It is single breasted and buttons to the neck with a small stand up collar. A single vent is at the back with piped edges and three buttons set on brocade, are on each flap. The sleeves are straight with piped velvet cuffs and a vertical band with three buttons are set on the brocade. Gold piping is around the collar and down the front; brocade trim decoration is also on the collar. There is a pocket inside the left breast and a small buckle is at inside waist.

Ensign James McPherson arrived in Auckland from Calcutta, May 1861, with his wife and two children with the 70th Regiment, under the command of Colonel Galloway. Later, he was paymaster in the Comissariat Transport Corps. July 1864, he received his commission as Captain and joined the 4th Waikato regiment.

His country grant was in the present-day suburb of Hillcrest and as well as farming the land he set up a flax-dressing mill. He named his property 'Riverlea' and built a two storied house of Kauri in the mid 1870s. In February 1871 he was elected as Waikato electorate's first Member of Parliament but he resigned in December that same year. Six years later he was appointed clerk and treasurer for the Waikato County Council and remained there until his death in 1905. He is buried in the Hamilton East Cemetery.

Captain McPherson was one of the fifty settlers who planted a tree in Sydney Square, Hamilton East, to commemorate the 25th anniversary of the Militia's landing at Hamilton.
See full details