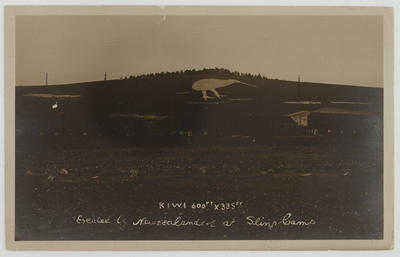 Sling Camp was a World Ward I camp occupied by New Zealand soldiers beside the then-military town of Bulford on the Salisbury Plain in Wiltshire. The camp was initially created as an annexe to Bulford Camp in 1903; it was originally named "Sling Plantation" after the nearby woods. Soon after the beginning of World War I, New Zealand troops started work on building wooden huts there. They were later joined by Canadian troops, joiners, bricklayers, and civilian works.

"It was not the experience of many New Zealand soldiers to visit all the New Zealand camps in England. Some men of the earlier drafts who went to France from Egypt, and were fortunate enough to escape wounds, had no acquaintance at all with them. Sling was the temporary home of most of the men - Sling unloved, bleak, and lonely. It reamined the chief New Zealand training camp in England throughout the war. The Plain was the manoeuvre ground of the British Army long before the war, and Sling had its name many years before New Zealanders camped there. High bare hills at the back of the camp, scratched everywhere white - all the Salisbury Plain in chalk land - with practice trenches, bombing-pits, and model dugouts, while here and there arose ancient, oval mounds, or tumuli. There tumuli had not to be desecrated, nor must the human bones be sought which tradition said were beneath - relics of the burial places of Britain's earliest inhabitants, possibly Druidical worshippers, possibly hairy beings older than they".