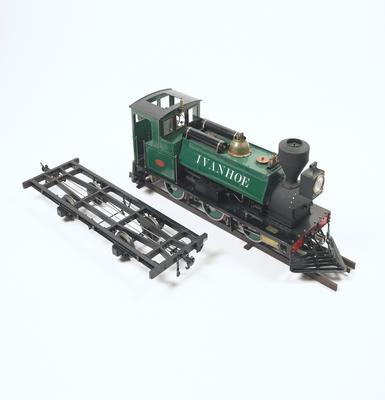 Maker
Vic L.B. Hurley
Production date
1966
Description
This scale model of the "F" Class Locomotive "Ivanhoe" was made in 1966 by Hamilton man Victor Hurley and purchased by the Waikato Museum in 1973.

The “F” class locomotive was a stalwart of New Zealand Government Railways during the nineteenth century. The tank engines were produced in Britain and designed to operate on the New Zealand railway network. Renowned for their toughness and durability, they had working lives of up to 100 years. Some rebuilt "F" class locomotives were still in service in the 1960s.

The engine on which this model was based, ‘Ivanhoe’, was the first New Zealand Railways locomotive to commence work in 1873. Built by Neilson and Company of Glasgow, ‘Ivanhoe’ took its name—like subsequent engines—from a novel by British adventure writer Sir Walter Scott.
See full details