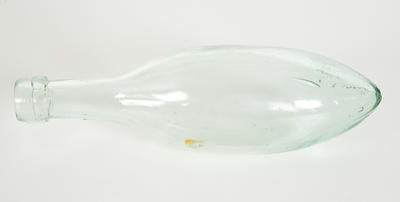 Maker
J. Grey & Sons
Production date
1880-1902
Description
Bottles of this shape were commonly used in New Zealand from c.1850-1865, and many were still being produced by local bottling companies through the early 1900s.

Patented in 1809 by William Hamilton of Dublin, this distinctive type of bottle was variously referred to as a ‘torpedo’ bottle, or as a ‘Hamilton’ bottle. The shape ensured that these bottles were stored on their sides, which meant that the cork would remain wet through contact with the liquid contained within. A wet cork kept a stable pressure inside the bottle and stopped the cork from coming out. Curved bottles such as these were also difficult to put down once opened, encouraging fast drinking of the aerated cordial or mineral water contained within.

Torpedo bottles were fitted with copper wire at the neck to secure the cork and feature a thick flange at the neck where the wire could be tied down. This bottle does not bear a maker’s mark and has been attributed to J. Grey and Sons, an Auckland business bottling aerated beverages from 1880-1902.
See full details