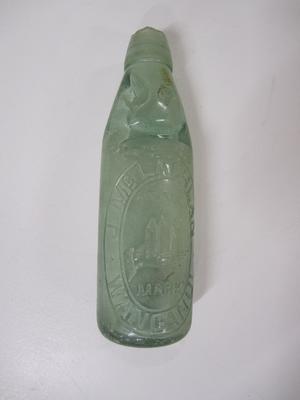 Production date
1898-1904
Description
Found amongst the shingle of the Upper Wanganui River in 1958, this aerated cordial bottle was produced around the turn of the twentieth century. It was later turned into a ‘money box’ when a cut was made to one side of the bottle neck to allow the insertion of coins.

Marked with the trademark ‘J. MCLACHLAN WANGANUI’ the bottle originated with an aerated and cordial business owned by J. McLachlan from 1898 to 1904. The business was situated on Wanganui’s Liverpool Street.

During the years when McLachlan was manufacturing from his Wanganui location, the Wanganui River Trust was active clearing the Upper Wanganui River with a mind to opening the waterways to steamboat navigation. This bottle may have found its way into the shingle of the riverbed from the hands of Pakeha exploring the waterways during these years.

The distinctive shape of the bottle is due to the patented design of Hiram Codd (1838 – 1887), an English engineer who invented the internationally successful design for a bottle sealed by a glass marble. This became known as the ‘Codd bottle’. As the bottle was filled under pressure, the marble was pushed against a rubber washer in the bottle’s neck, producing the perfect seal for aerated drinks. Following Codd’s death and the end of his patenting rights, bottles using this design became common amongst British bottle manufacturers, including Wanganui’s J. Mclachlan.
See full details