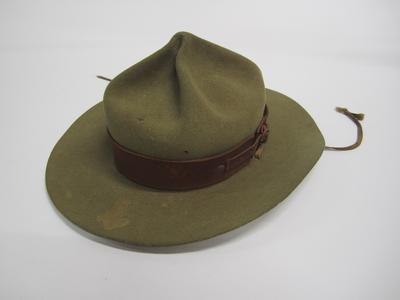 Production date
1929
Description
This hat is from the 1st Claudelands scouting group. The Claudelands scouting group was active for a short while in the late 1920s and disbanded in 1929. The previous owner of this hat, Jim Whyte, is likely to have been Major James B. Whyte of Claudelands. If this is the case, Jim would have had the role of Scout Master. In 1929 Whyte was a respected Hamiltonian who retired from the military at the age of 72, this was also the point at which Claudelands Scout Troop disbanded.
See full details