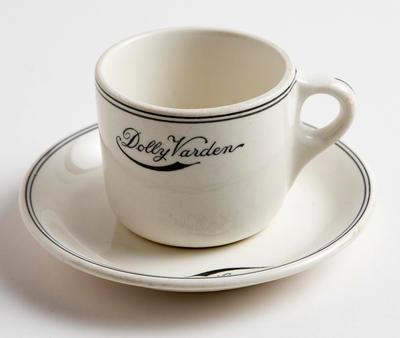 Maker
Grindley Hotel Ware Co.
Production date
Circa 1950s-1970s
Description
Cup used by Dolly Varden Restaurant & Cafe, Victoria Street, Hamilton c1950s-1970s. The Dolly Varden Restaurant in Victoria Street, established by the Jones Brothers in the 1920s, took its name from a precocious character in Charles Dickens’ historical novel Barnaby Rudge (1840). For decades until its closure in the early 1980s, the Dolly Varden, located at 221 Victoria Street was one of Hamilton’s best-loved casual eateries. The Dolly Varden served ice creams, milkshakes, tea and instant coffee, as well as a range of simple but hearty meals. Francis Buysman, who ran the Dolly Varden with her husband Nicholas from 1970 until 1979, recalled “we did basic food ... meat pie and sausages, eggs and chips, poached eggs, steak. It was essentially good family food. We were very popular with families and young people, although the busiest day of the month was always pension day.”
See full details