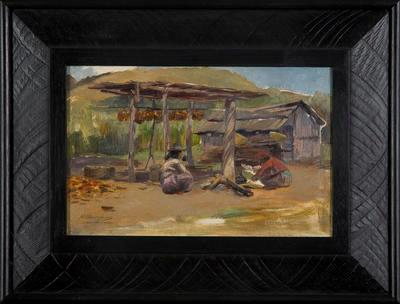 Maker
Horace Millichamp Moore-Jones
Production date
Unknown
Description
Best known for his war time paintings of Gallipoli, Moore-Jones also painted many other subjects during his career. This painting showing two Maori women preparing food next to a covered shelter is typical of the artist’s painting style.

Horace Millichamp Moore-Jones (1867–1922) was born at Malvern Wells, Worcestershire, England. After his family relocated to New Zealand around 1885, Moore-Jones took up painting lessons and later married his tutor Anne Dobson. They moved to Australia where Anne died in 1901. He later returned to New Zealand before joining the war effort in 1914 where he was stationed in Egypt before participating in the allied landing at Anzac Cove on the Gallipoli peninsula. His subsequent sketches, maps and paintings were worked up into an impressive body of works that were shown at Buckingham Palace and toured New Zealand. Upon his return to New Zealand Moore-Jones became a teacher in Hamilton. During a fire at the Hamilton Hotel in 1922 he sustained fatal injuries and passed away at Waikato Hospital.
See full details