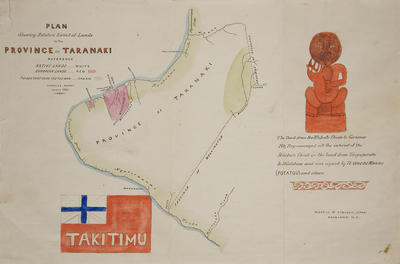 Maker
Charles Heaphy
Production date
1861
Description
Early map dated 1861 of the Province of Taranaki "Takitimu". It shows the extent of Native and European lands in the province at the time. This map would have been made in the early period of Heaphy’s time in New Zealand. Much of the country was still being mapped at this time and Heaphy was among those that travelled to some of the more inaccessible areas including the west coast of the South Island and the west coast of the lower North Island.

Charles Heaphy (1820 – 1881) was born in London, England. Having worked as a draughtsman for British Railways and trained at the Royal Academy, Heaphy eventually secured a position with the New Zealand Company arriving in New Zealand aboard the Tory in 1839. Based in Port Nicholson (Wellingotn), he produced some of the earliest and best known views of the New Zealand landscape and Maori. After a period of some poverty in Nelson, Heaphy acquired a string of roles in public service including secretary to George Grey during a trip to Norfolk Island. In 1880 he retired as a Native Land Court Judge and relocated a year later to Brisbane, Australia where he subsequently passed away.
See full details