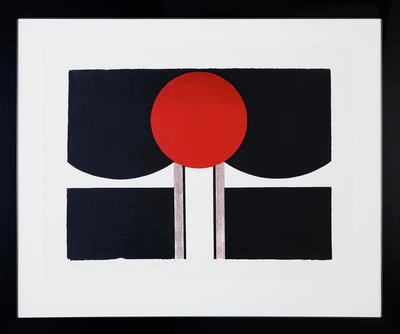 Image From Page 24 of Te Atea

Maker
Paratene Matchitt
Production date
2005
Description
Te Pakanga is a set of 35 drawings by Paratene Matchitt commissioned by School Publications in 1974 to appear in Te Atea, a book written by Katerina Mataira. Mataira’s verse is in Te Reo Maori and was intended to act as both a narrative and a tool to learn the language. Matchitt uses his signature stylised patterning to illustrate the themes of Mataira’s text. Ideas of war and restoration are rendered as graphic depictions that incorporate iconography often associated with Maori subjects including the use of black, red and white, kowhaiwhai and elements of tukutuku.

Paratene Marchitt (1933 -) was born in Tokomaru Bay on the East Cape of the North Island and is of Whanau Apanui and Ngati Porou descent. He spent most of his childhood in Te Kaha, later attending Hato Petera Maori Boys College and then Teachers College in Auckland. Although not formally trained as an artist Matchitt spent a large proportion of his professional life as an arts advisory within the New Zealand Education system. His art career took centre stage during the 60’s, 70’s and 80’s due to a number of large commissions and an increased interest by the art community in modern Maori art. Maori artists/educators of the time including Ralph Hotere, Fred Graham, Arnold Wilson and Matchitt became the primary proponents of this new approach which was to become known as the Maori Art Movement. Known for his oil paintings and large scale sculptural works, Matchitt’s work appears in most major New Zealand art collections and has been exhibited extensively both here and internationally.
See full details

Image From Page 24 of Te Atea