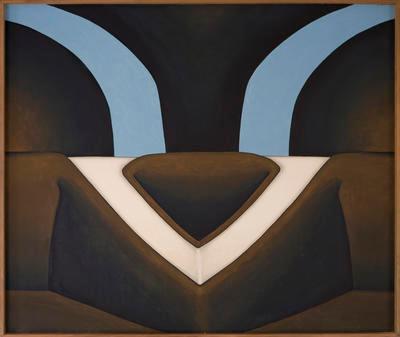 Maker
Mary McIntyre
Production date
1972
Description
Abstracted painting of a Waikato landscape. The bold blue lines appear to be a river which conclude in a 'V' shape, while the dark hills cast striking shadows behind.

Mary McIntyre is an artist considered to be one of New Zealand's foremost realist figurative painters. She began painting while living and working in Waikato, where her husband was a farmer. During the late 1960s she attended Elam School of Fine Arts and was tutored by Colin McCahon. Aside from her landscape paintings of New Zealand, Mary is also known for her portraits, often painting herself as the protagonist. Imbibed with a sense of humour, McIntyre's works also challenge political correctness.
See full details