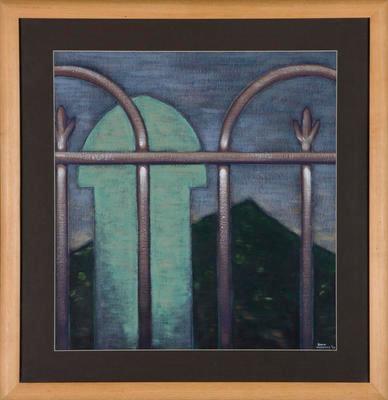 Maker
David John Woodings
Production date
1990
Description
Depicting the physical traces of New Zealand's dark history, Rangiowhia to Maungataurari features a headstone surrounded by a metal fence. The dark and sombre colours hint at the horrors behind the fight at Rangiowhia where 12 Maori lost their lives on 21 February 1864.

David Woodings (1956–) studied at Elam School of Fine Art in the early 1970s under Don Binney, Robert Ellis and Garth Tapper. Heavily influenced by photorealism, Woodings works are also politically and socially charged. Woodings moved to Southland in 1999 to take up the position of Director of the Regional Museum and Art Gallery, but he returned to full-time painting in 2005. Since 2010, David’s work has been heavily influenced by the Christchurch earthquakes.
See full details