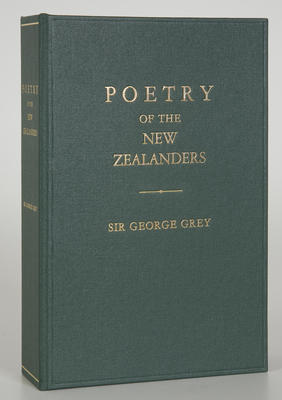 Book - Poetry Of The New Zealanders

Maker
George Grey
Production date
1853
Description
This rare first edition of the songs and chants of Maori compiled by Govenor of New Zealand George Grey was published in 1853. Completed at the height of Grey’s ministrations between European settlers and Maori, this work demonstrates his keen understanding of diplomacy. Included is a handwritten letter in English giving a translation of a lament by Te Rauparaha, a Ngati Toa chief who spent much time in conflict with Waikato and Maniapoto.

George Grey (1812-1898) was born in Lisbon, Portugal. After a period of military education, Grey was appointed Governor to South Australia where his austere economic measures outweighed his unsuccessful attempts at assimilating the aboriginal population. In 1845 he relocated to New Zealand to take up the Governorship and assert British authority. A successful politician and businessman, Grey understood that peace would bring prosperity to this new colony and he gained many supporters, both Maori and European over the next ten years. In 1853 Grey left New Zealand to become Governor of the Cape Colony and High Commissioner for South Africa. However, Grey was to return to New Zealand at the outbreak of the 1860's land wars and he became a prominent figure in New Zealand politics until 1893 when he departed for England where he passed away six years later.
See full details

Book - Poetry Of The New Zealanders