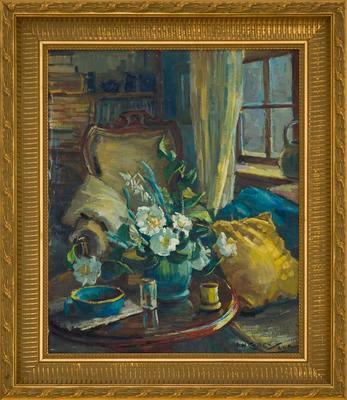 Untitled (Camellias In The Afternoon)

Maker
Ida Harriet Carey
Production date
Unknown
Description
A scene that has been attempted by numerous artists over the decades, this domestic interior shows Carey's preference for painting subjects in controlled conditions. Her attention to detail while still maintaning a fluid brush stroke demonstrates her well developed painting abilities, which could be adapted for various subjects.

Ida Harriet Carey (1891–1982) began her career as an artist in the 1920s. While visiting Sydney to attend classes with Italian artist and teacher Anthony Dattilo Rubbo, Carey met Frances Ellis who became a close friend and peer. Carey became noted for her portraits, in which she skilfully used colour, line and tone with great confidence. After a serious car accident her interest in spirituality grew and manifested itself in her paintings of women with the Kauae Moko (Maori women’s chin tattoo). Carey was a founding member of the Waikato Society of Arts and resided on many local and national art committees including the McDougall, the Rotorua Museum and the Waikato Museum. She spent her last years in Travellyn Rest Home, leaving a stockpile of over 1,300 paintings.
See full details

Untitled (Camellias In The Afternoon)