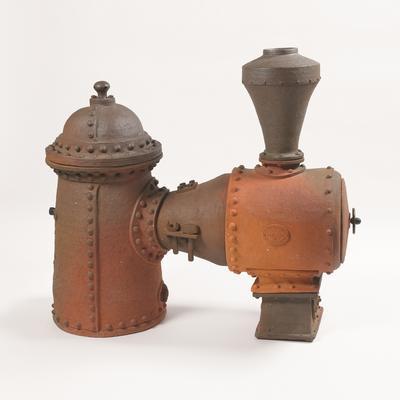 Barry Brickell describes this as a rivetted loco boiler. This construct was commissioned by Ken Gorbey, Director of the Waikato (Art) Museum, in 1983. Mr Gorbey spent a lot of time with Barry at Driving Creek and this was one of the pieces produced from that relationship. This work precedes the locomorph produced for the Dowse gallery. Mr Gorbey had paid a lot of attention to Barry's work, intending to build on the Museum's ceramic collection by concentrating on visionary potters like Barry. He had been planning a large scale ceramic exhibition entitled "Visions of an Imperfect Utopia" and had commissioned various works for this exhibition. Unfortunately Mr Gorbey left in 1985 to pursue a position elsewhere and the exhibition did not go ahead.
See full details