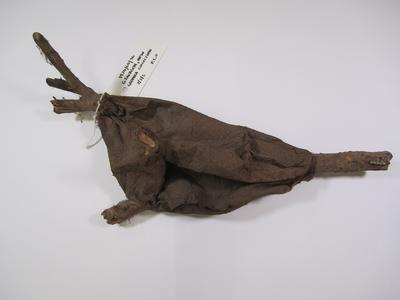 Maker
Unknown Maker
Description
In 1974 Waikato Museum acquired a selection of items, including this bag moth or insect sack container, from Graham Jackson. Jackson was a New Zealand anthropologist who spent time living with and researching the Kopon and the Kalam people of the Lower Kaironk Valley in Papua New Guinea.

Jackson fieldnotes: Insect nest used for artefacts. Name of insect awo; nest; ryn. The grub-like forms are eaten out of the nest and the nest is used as a container to wrap clay pigment or small valuables in. These may then be put in a bamboo container. The nest is also used to stuff up the openings of bamboo containers as a kind of plug. Made by insects.
See full details