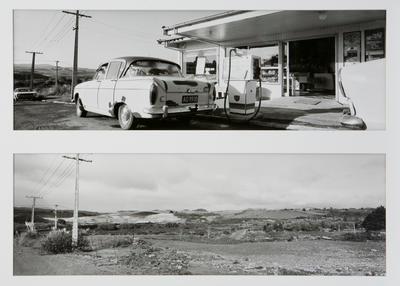 Maker
David Bramwell Cook
Production date
1987
1989
Description
Photographs taken in 1987 and 1989 by commissioned photographer, David Cook for use in the 2000 Shifting Ground: Stories from Rotowaro exhibition. Images depict the same scene taken two years apart. The upper image shows a Hillman car (number plate AO9930) that is parked in front of a BP (British Petroleum) petrol pump. A dairy/shop with an opened doorway can be seen behind the pump. Its advertising material promotes Coca Cola, Sterling 25's (cigarettes) and Strongman cigarettes. The left hand side of the image shows a small stretch of sealed road, power poles another parked vehicle and hills in the far distance. The lower image shows the same vista but with all buildings demolished. The power poles are still in situ and the road remains visible but has deteriorated in quality. The land has been cleared and flattened. There are buildings scattered across the far distance and a road with a railway crossing can be seen near the middle of the image.
See full details