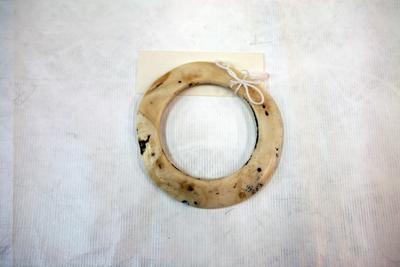 Description
In 1974 Waikato Museum acquired a selection of items, including this neckband, from Graham Jackson. Jackson was a New Zealand anthropologist who spent time living with and researching the Kopon and the Kalam people of the Lower Kaironk Valley in Papua New Guinea.

Jackson fieldnotes: Ornament neckband of shell, probably cut from Tridacna (?). One of the less common form of ornaments. Wiwo rablay = valuable name of shell. May be worn round the neck by both sexes. Probably made by men.
See full details