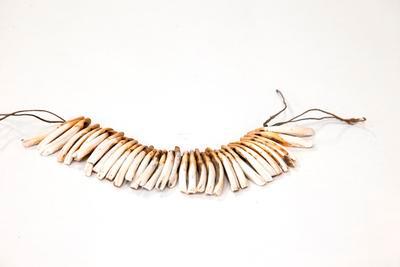 Maker
Unknown Maker
Description
In 1974 Waikato Museum acquired a selection of items, including this necklace, from Graham Jackson. Jackson was a New Zealand anthropologist who spent time living with and researching the Kopon and the Kalam people of the Lower Kaironk Valley in Papua New Guinea.

Jackson fieldnotes: Necklace of 35 pig teeth lashed to two ply fibre cord. Domestic pig teeth. The particular tooth is known as plaj. This is the only necklace of this kind that I have seen. Probably manufactured by men. Those made by only one sex are likely to be made as gift for opposite sex, especially clothing. Probably worn by anyone but men more than women.
See full details