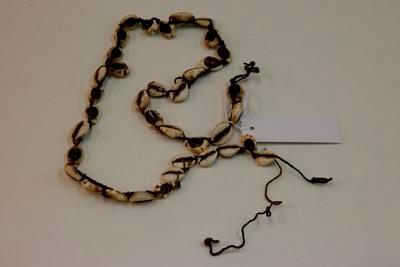 Maker
Unknown Maker
Description
In 1974 Waikato Museum acquired a selection of items, including this necklace, from Graham Jackson. Jackson was a New Zealand anthropologist who spent time living with and researching the Kopon and the Kalam people of the Lower Kaironk Valley in Papua New Guinea.

Jackson fieldnotes: Necklace of 37 cut cowrie shells knotted into a two ply cord. Worn by both sexes. These are much used in exchanges/presentation/compensation. They are also worn around the head on ceremonial occasions.
See full details