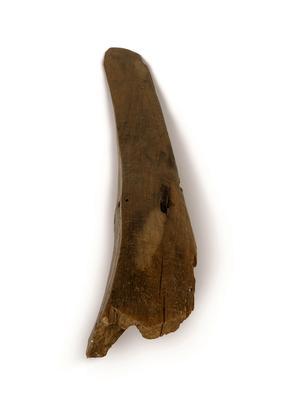 Dating from the Te Puawaitanga period (1500-1800), the taurapa exhibits an early form of Maaori artistic decoration. Groups of lined striations transverse the surface. These were achieved with a punching technique, probably with a small adze.

As an example of an early decorative form, the taurapa has been identified as a historical companion to a bow-cover of a Polynesian-style canoe which radio-carbon dating has connected to the fifteenth century. This taonga, held by Aotea Utanganui/Museum of South Taranaki, features similar rows of pecked lines, as well as spirals.

This taurapa appeared in the Te Maori exhibition, along with the Taranaki canoe-bow cover and other taonga from Waikato Museum. The taurapa was the inspiration for Lyonel Grant's large-scale bronze sculpture of a taurapa unveiled at Lake Karapiro in 1992.
See full details